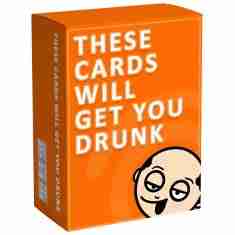 These days, board games aren’t just fun for kids. Plenty of adults are gathering together to play adult games. Most adult games are card and dice-based games, similar to traditional board games, only with risqué language and plenty of inappropriate humor.

Beyond comedic value, you also want a board game which is easy to learn and fun to play. The right adult board game often acts as a great ice breaker and helps kick the party into high gear. Here’s a look at the 10 best adult games for your next get-together: 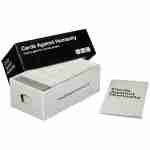 Possibly the most popular adult party game of all time, Cards Against Humanity is a classic for a reason. Billed as a “Party Game for Horrible People,” CAH revels in raunchy humor and overall bad taste. But don’t be surprised if even the older, more polite members of the family end up laughing and smiling – this outrageous game is just that funny!

The box (which they refer to as “America’s #1 Gerbil Coffin”) contains over 500 white cards and 100 black cards. This is version 2.0 of the game, which includes over 150 new cards. Also includes a rulebook with instructions for the official game as well as a variety of completely bonkers alternate game variations.

Play is simple and lively. One player called the Judge selects a Black Card which contains a statement ending in a blank. The other players then each choose a White Card from their hand in order to complete the phrase. The player with the most outlandish answer wins! All topics are guaranteed to be outrageous, offensive and completely hilarious.

2. These Cards Will Get You Drunk 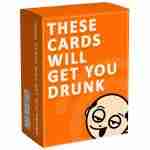 Well, the name of the game makes its purpose pretty clear. This set of 100 hilarious cards is a drinking party game designed to get the players drunk – and it’s really not messing around. Perfect for parties, game days or any other occasion where people really want to get loose.

Players take turns pulling a card from the deck and reading it aloud. Each card has some silly action or game such as:

Play isn’t just simple, it’s also scoreless. Everyone wins (well, if winning is defined as “gets drunk”). Suitable for two to eight players ages 21 and up. Be aware that the fewer number of players, the more each person will likely drink. Make sure nobody drives and everyone stays safe, as you can end up drinking a great deal in a short period of time.

3. What Do You Meme? Adult Card Game 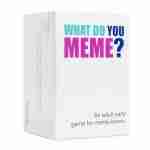 Do you and your friends spend way too much time on the Internet? Then this is the perfect party game for your next IRL meet-up. What Do You Meme? is a humorous board game based around popular memes such as Awkward Moment Seal, the “evil” little girl watching a house burn down, Joe Biden staring out a window and many more.

Play is actually pretty similar to Cards Against Humanity. A Photo Card is drawn and then each player places down their most appropriate Caption Card – the best meme wins! As with CAH, scores don’t need to be kept. The main point of the game is to simply bring the LOLs.

While the humor might not be high-brow, the game itself is very high-quality. All cards are printed on thick playing-card stock with a glossy finish. Includes 360 Captions Cards, 75 Photo Cards, an easel and a rulebook. 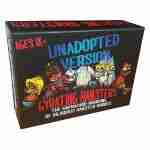 Gyrating Hamsters is a fun, if a bit odd, all-ages board game. The Unadopted Version is a raunchier, more outrageous version of the game designed for players over the age of 18. Like the original, the goal of the Unadopted Version is to be the first player to “horde” 16 hamsters. Gameplay is mainly dice-based and, while there’s some strategy, a whole lot of luck is involved.

Still, the main point of the game is laughter, which the game does deliver for the right (wrong?) audience. The 18+ Unadopted version isn’t terribly over-the-top but still packed with plenty of gross-out humor. Each hamster has a unique, deranged and downright filthy personality.

Gyrating Hamsters is designed for two to five players. Includes a dice, rules and a complete set of high-quality hamster cards, each one drawn in expert, cartoony detail. Games are fast-paced and typically take no more than 15 to 30 minutes to complete. Great for quick fun with friends. 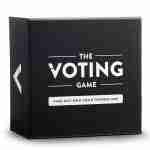 This game is a great and unusual way to get to know your friends in a whole new light. The Voting Game is a question-and-answer game which is both fun and revealing.

First, the Question Card is revealed. These are often absurd or tongue-in-cheek queries such as:

Players vote anonymously for whichever member of the group they think is the most appropriate (or inappropriate) answer. For every vote a person receives, they’re allowed one guess as to who voted for them. Every correct guess is awarded one point.

Game includes 160 Question Cards and 90 Voting Cards. Up to 10 people can play the game at once, and the game is different every time depending on the players. Each game takes about 30 to 90 minutes to complete. Plus, several expansion packs are also available. 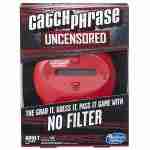 Hasbro’s Catch Phrase is a classic quick-thinking word guessing game, and this Uncensored version adds a whole new vocabulary. Players divide into two teams and then take turns trying to get teammates to say the word displayed on the electronic game device. If your team is holding the device when the timer is up and the buzzer goes off, the other team gets a point. First team to seven points wins.

Everything you need to play is in the game unit, which includes a timer, buzzer and over 5,000 adult words and phrases. Answers are naughty but generally tame such as “pee in the pool,” “silent but deadly” and more. Categories include Pick Me, World Wide What, You Never Know and other irreverent topics.

Perfect for two teams of at least two people each, but the more, the merrier. A great “adults only” take on a classic game. 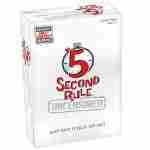 The “5 Second Rule” game was originally popularized on Ellen’s talk show, but this version is definitely not safe for TV. Players grab a topic card and then have five seconds to name three things in that category. Require quick thinking and a dirty mind!

Includes 150 two-sided cards for over 300 topics. Plus, because the topics are open-ended, you’ll have fun even after playing a ton of times. Also includes the infamous Twisted Timer, which makes a silly and distracting noise. Designed for three or more players ages 17 and older.

Topics are risqué but not overly inappropriate. Examples include “Name 3 Ways to Hide a Fart,” “Name 3 Reasons to Have a Drink” and more. Easy to learn, fun to play and great for getting the party started.

8. Circle of Jerks by PlayFore Games 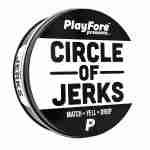 Do you and your friends like to scream obscenities and generally make a lot of noise? Circle of Jerks might be just the game for your next get-together. This card-based game is designed for anywhere between two and eight players.

Each player takes turns picking a card, which has several pictures or words. Players have to match the card to a center card, making sure to yell out the item on the card – and it’s sure to be obscene! Note that, of all the games on our list, this one involves the most swearing and overall raunchiness. Definitely not family friendly (although, for the right group of people, that’s all part of the fun).

Includes 57 cards and an instruction card. The entire game fits into a custom tin for easy transportation. Each round lasts a fast 15 to 60 seconds. Also includes alternate drinking game rules. 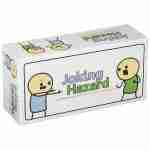 Looking to add a bit of creativity to game night? Joking Hazard is a sometimes crude and always funny board game from the creators of the hit webcomic Cyanide & Happiness. If you’re already a fan of the comic, you’ll be instantly familiar with the look and humor of this game.

Each of the 360 cards acts like a panel in a comic strip. Gameplay is similar to the Cards Against Humanity model. First, a card is drawn from the deck. That’s the first panel. Then the Judge selects a middle panel. Finally, the contestants draw a card from their hand attempting to add the best final panel to complete the comic.

If it sounds like there aren’t a ton of rules, that’s because there really aren’t. Play is flexible and often subjective with lots of laughs. Humor is adult and inappropriate but not particularly raunchy or X-rated. A variety of alternate rules are included so your group can play however they choose. 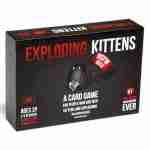 This card game is one of the most-backed projects in Kickstarter history – and it’s easy to see why. Addictive, fast-paced and hilarious, the NSFW edition of Exploding Kittens includes all-new illustrations by The Oatmeal.

Described as a strategic, kitty-powered version of Russian roulette, players draw cards each round – but if you draw the exploding kitten, you lose. However, the game adds a bunch of fun complications such as cards which defuse kittens, let you peek at the deck and add other tricks and traps.

Game set includes 56 cards, which is enough for between two and five players. However, two decks can be mixed together to allow up to nine players. Each card is a mini work of art with kittens, dragons, evil enchiladas and more. Detailed storage box even includes a hologram for authenticity.

What are the Best Adult Games to Buy?

Board games are more popular than ever before with adults – but not all adult board games are the same. Just because a game has swear words and crude comedy doesn’t necessarily make it fun to play. You want to consider the type of game as well. Here’s what to look for when selecting the best adult game:

Who Will Be Playing the Game?

Generally speaking, who is going to be playing your new adult board game? An adult board game can be laugh-out-loud fun with one audience but uncomfortably awkward with another. Make sure the specifics of the game are appropriate for your intended audience of players.

Games like Cards Against Humanity are typically fun for everybody because players just pick and match cards. Much of the “shock value” is random and similar to a Mad Lib. However, other games such as Circle of Jerks are far more interactive. Grandparents and other older players might not feel very comfortable shouting out inappropriate phrases.

How Vulgar and Inappropriate is the Game?

Check for samples of the type of humor in the game. While all adult games will likely contain crude comedy, there can be some pretty significant differences between each game. For example, Circle of Jerks contains a lot of sexual innuendoes and graphic humor. But – despite the name – Exploding Kittens is actually one of the tamer adult games, with a style of comedy similar to classic Warner Bros cartoons.

How Fast and Complicated is the Gameplay?

Generally, most adult board games have fast-paced rounds. Matches are typically completed in about 15 to 30 minutes. While certainly some strategy is involved, most adult games are designed to be more about having fun than being competitive.

Fortunately, fun is practically guaranteed. Adult games are a great way to take to your next party or social gathering to a whole new level of hilarity. Use our guide above to choose the perfect game for your group – and let the fun begin!