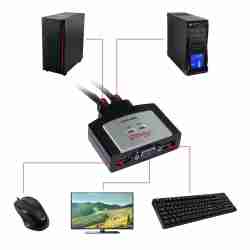 If you’ve ever had to use two different computers at the same time, you probably know how annoying it is to go back and forth between different mouses, keyboards, and monitors. While you’re trying to concentrate on the screen, you’re constantly distracted by which device you’re supposed to be using. However, there is a tool to help simplify the process. This tool is a KVM switch.

With a KVM switch, you can operate two or more computers with the use of just one mouse, one keyboard, and one monitor. Not only will this reduce clutter and make it more simple to operate your different computers, it will also allow you to save money by not having to purchase additional computer accessories.


What is a KVM Switch and Does it Work?

Also known as PC switches, server switches, and CPU switches, these units are small in size and can accommodate anywhere between two and eight different computers at the same time. If you want to use several computers simultaneously, a KVM switch is the answer.

What Are the Benefits of a KVM Switch?

Probably the most important benefit of purchasing a KVM switch is that you’ll be able to access two or more computers with the use of just one keyboard, monitor, and mouse. This will allow you to sit comfortably in one place so that you can focus on what you’re doing, and not on which computer accessory you should be using.

A KVM switch will also save you money as you will not have to purchase additional keyboards, monitors, and mouses. Fewer computer accessories equals less clutter, allowing you to keep your desk area clean and organized.

How to Set Up a KVM Switch

Setting up a KVM switch is easy. Usually, the most difficult aspect is simply ensuring you have all the proper gear. You’ll need two sets of cables for two computers, three for three and so on. You’ll want a good computer desk for all the components too.

Before you start, turn off both computers. Then hook up the all relevant devices to the corresponding input ports on the KVM switch. Monitors, keyboards, and mice are the most common devices used with KVM. But many other standard devices can also be connected, such as a drawing table or speakers.

Once all devices are connected, you can turn on both computers. Every connected computer should automatically identify the switch. Switch between each computer to ensure every device works properly. Many people label each computer port to limit confusion.

Who are the Contenders for Top KVM Switch Overall?

With four USB ports, this IOGEAR KVM switch has excellent connectivity. It also contains a USB 2.0 port which will allow you to connect an external hard drive, printer, or scanner to several computers at the same time. Built to accommodate 2.1 stereo audio and microphone, it switches all devices over to all computers seamlessly. It also provides a user interface made specifically for digital monitors.

Though it has just two USB ports, this Avocent KMV switch still delivers gold-standard functionality. It switches from computer to computer without delay, allowing you to access needed files without losing your train of thought. With top-notch DVI-I video connection and excellent resolution up to UHD 4K, this switch transfers data from your computers to your modem without any loss in quality.

With four USB ports, including two DDM ports and two hub ports, this ConnectPro KVM switch has superb connectivity. With the ability to switch computers seamlessly, it has no delay or image-sizing issues. Compatible with touchscreen, Windows 7, Windows 8, and Windows 8.1, it works perfectly with most devices you throw at it.

What Makes a Good KVM Switch?

Though the main purpose of a KVM switch is to be able to switch between two different computers with the use of one keyboard, one mouse, and one monitor, there are a number of other things to consider when you’re looking to purchase one. The best KVM switches will be capable of switching computers seamlessly, taking minimal time to react to user commands. Port capacity, system compatibility, and on-screen display are also very important gauges of a switch’s value.

Unfortunately, not all KVM switches are compatible with all computer systems. While some will work with Mac and Windows, others will only work with Windows or Mac. Before making a purchase, it’s important to ensure that it will work with your specific system.

The quality of your KVM switches can directly affect the quality of the image that shows up on your computer screen. While poor switches will cause your monitor to look grainy and pixelated, the best ones will make your monitor look as if it isn’t attached to a switch at all.

How Do Our Top KVM Switch Picks Compare?

Here’s how our picks for best KVM switches measure up on features and functions.

Though it doesn’t connect seamlessly with all operating systems, this IOGEAR KVM switch is capable of working with just about any system you throw at it. It takes some time to get acquainted with each new system, but has been proven to cooperate with both Mac and Linux servers.

Like the IOGEAR, this Avocent KVM switch is compatible with just about any server you can think of. Whether it be Windows, Mac, or Linux, it is more than capable of syncing up with consistency, and without delay. The one problem you might run into with this switch is the problem of using a multimedia mouse. Unfortunately, it only supports a standard mouse.

As far as compatibility goes, this ConnectPRO KVM switch is right up there with the IOGEAR and Avocent switches. Users have had no problems using it with Windows, Mac, Linux, and even some lesser known systems. It has also been proven to connect seamlessly with a wireless mouse as well as a wireless keyboard.

This IOGEAR KVM switch makes use of an external power supply meaning it does not need to be connected to a computer in order to be powered on. Ultimately, this makes it run much more smoothly, reducing delay when you switch computers, and ensuring that there is little lag when using hot button commands.

In terms of its power supply, this ConnectPRO KVM switch is comparable to the IOGEAR and Avocent. It makes use of an external supply which allows it to be powered without the use of a computer. This allows for seamless computer switches with no remarkable delay to speak of.

Like the IOGEAR switch, this ConnectPRO KVM switch possesses four USB ports. These ports support USB 2.0 speeds, and allow you to connect to a variety of devices, including printers, scanners, external hard drives, to name a few.

As far as on-screen display goes, Avocent is king. Capable of supporting high-resolution systems, including UHD 4K, it switches systems seamlessly with almost no latency. Its max resolution measures in at 2048 x 1536, ensuring that your display will always be clear and focused.

With a user interface designed specifically for modern digital monitors, this IOGEAR KVM switch possesses an excellent on-screen display. As you switch from computer to computer with this device, you will notice no resolution lag of any kind. What that means: smooth, fuss-free computing.

With DVI-I display resolution, this ConnectPRO KVM switch is capable of displaying high-resolution video and image. At its maximum, it can support a resolution of 1920 x 1080. While this isn’t as good of a resolution as you’d get with the IOGEAR and Avocent, it is still a very clear and detailed resolution. 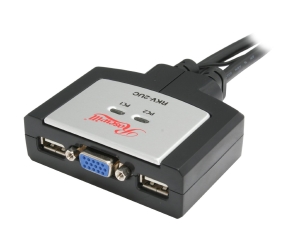 With excellent versatility and functionality, this Rosewill KVM switch is the best affordable KVM switch if you’re on a budget. Though it sports just two USB ports, it is able to switch computers with very little effort, usually requiring only around four mouse clicks. Its built-in VA connector supports monitors with up to 2048 x 1536 resolutions. If you’re looking for a very affordable KVM switch that will reliably allow you to switch computers, you should check this out. 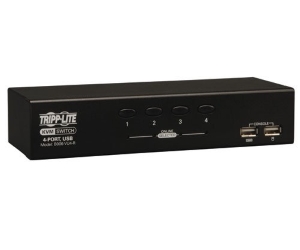 This Tripp Lite KVM switch offers four USB ports at a very reasonable price. With the ability to switch between computers with either hotkey commands or push buttons, it is beyond easy to operate. Its Auto Scan Mode is able to monitor all connected computers without switching to them, keeping them updated at all times. If you’re looking for a switch with a lot of connectivity at a fair price, you should absolutely give this a look. 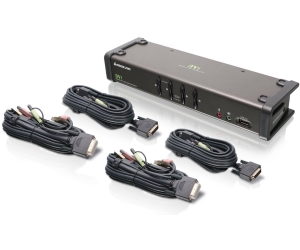 Boasting four USB ports as well as one USB 2.0 port to connect to printers and external hard drives, this IOGEAR KVM switch offers outstanding connectivity and is our pick for best KVM switch overall. Able to seamlessly switch from computer to computer, it has very little delay. Its user interface, meantime, is specially created for digital monitors, making it perfect for modern technology.

If you’re working on a project or have a job that requires more than one computer, a KVM switch can revolutionize the way you work. Giving you the ability to switch to many different computers with the use of just one keyboard, monitor, and mouse, it will save you a ton of time and lessen distraction as much as possible.

Powerful switches like the IOGEAR 4-Port DVI KVMP Switch offer you a ton of connectivity while keeping you locked into what you’re doing at all times. Want to make your job as easy as possible? A KVM switch is the answer.