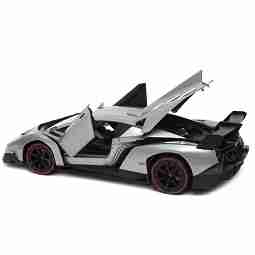 There is something instinctively satisfying about messing with a controller and making another object move around really quickly. From this basic human impulse has sprung a huge market of RC cars that do just that.

Inspired by real sports and rally cars, remote control cars have a huge following among hobbyists who collect, upgrade, and race the smaller models. This guide will explore some of the sleekest and fastest RC cars out on the market.


An Introduction: What Is an RC Car?

Higher-tier RC cars use real fuel and oil, are capable of being upgraded, and have advanced controls for precision driving. Many hobby shops organize races so that collectors can show off their enhanced remote vehicles.

What Are the Different Types of Remote Control Cars?

RC Cars aren’t inherently different from one another in many ways, but clear distinctions appear when looking at different classes of models that separate the casual toys from real pieces of technology.

Advanced RC cars are not just battery powered vehicles that zip around for a little while, but fully customizable vehicles that use real fuel to move at high speeds. They require maintenance, upkeep, and are highly valuable among hobbyists.

The last few years have been big for RC cars. Unlike the RC cars of the past, the RC cars being produced today are exponentially better as a result of higher capacity batteries and better control systems. At the same time, the cost of RC cars is remaining more or less the same.

Thanks to these new high-capacity batteries, your RC car can charge faster and run for far longer than ever before. This means that you can find RC cars which are heavier and exhibit better performance than you could have before.

The result is that RC cars are becoming increasingly serious and more fully-featured. These aren’t just toys for children anymore — there isn’t much which separates an RC car and a mobile camera platform or something similarly useful.

What Are the Contenders for Best RC Car on the Market?

Considerations for Choosing the Right Model

Just like when buying a real car, the key to selecting a good RC car is performance. Users want a vehicle that is swift and responsive, even at high speeds. Dedicated hobbyists will need to determine how much they can upgrade their purchase while also considering how much general maintenance a car will require.

The Veneno’s controller is styled after a gear shifter. It’s fun to look at and easy to use in its way, with a very simplistic button design that is easy for anyone to understand. The controller isn’t precise enough to perform many stunts or feats, but for children who just want to drive it back and forth, there’s nothing easier to use. On the plus side, like the car, the controller is a nice decoration in the right household.

The Bugatti Veyron is controlled by a powerful transmitter that communicates at the 2.4GHz frequency: generally used by most manufacturers. Its controls are easy to learn and users can expect to put a few tricks in their arsenal pretty quickly. The car drives very well on just about any surface but is perhaps most entertaining when kicking up loose gravel while drifting. It is a very well balanced car, with aluminum capped shocks absorbing much of any impacts or inconsistencies it encounters.

The Rock Crawler’s controls are simple and precise. The controller is a common design, easy to hold and get used to. The car’s 4-wheel drive makes its performance exceptionally consistent, and its long-travel suspension serves to keep it feisty even on harsh terrains. The Rock Crawler is perhaps as close as one can get in an RC car to the power and precision of a full sized vehicle. It keeps its responses immediate and impactful.

Quite unlike the supercar it is designed after, the Veneno’s low power makes for very average speed. On a smooth surface, it might look a little fast but generally speaking one shouldn’t expect this car to do much. It is more a toy or an item for model collectors than it is a racing RC car, where speed is more of a necessity.

At its peak, the Bugatti Veyron can move at a speed of around 15 miles per hour. At its lowest speed, it moves at around 8 miles per hour. While there are faster cars on the market, for its price, it moves terrifically well.

The Rock Crawler is not designed to move quickly. With a monster truck design, it is meant to tear through rocky and uneven terrains without any problem whatsoever. If you’re looking for a speedy remote control car, you should look elsewhere. If you want something that can handle any terrain condition, this is the car for you.

The Veneno’s meager capabilities can’t be easily expanded upon, but with some experience in mechanical engineering, perhaps anything is possible. However, the car isn’t really meant to be tampered with. The Veneno is built to provide basic enjoyment for young people, and asking any more of it would be frivolous. This is hardly a problem for what it is really meant for, but it fails as an RC car for hobbyists.

For the most part, the Bugatti Veyron is set in its packaged construction. While you may find a way to add on additional features, you are going to be stuck with the original design and construction. However, seeing as how nicely this car runs, there should be nothing wrong with that.

While it works perfectly as packaged, this Rock Crawler probably could be expanded by engineers who know what they’re doing. Made for its ability to traverse rocky terrains, there is really no reason to try and make it faster. With a superior shock system, any updates made to it should be limited.

The Veneno gets a lot of drive time out of its rechargeable batteries, that can be substituted for regular AA batteries. Naturally, there isn’t much power to be had from either of its available sources, but the Veneno isn’t meant to be driven that intensely.

The Rock Crawler is completely electronic, requiring no additional upkeep or lubrication sources. It is completely plug and play, yet still has the power you need to run over any terrain. The electronics are touted as water-resistant and live up to that claim, though one would be wise to keep the car dry after use to prevent it from rusting. It runs on 4 AA batteries for the car itself, and 3 AA batteries for the controller.

Conclusion: Our RC Car Reviews Are In 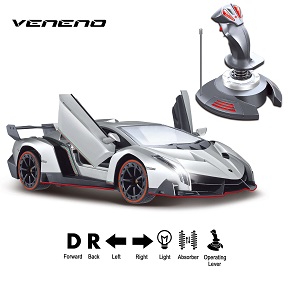 Holy Stone delivers a delightful plastic replica of an absolutely insane concept car in the Lamborghini Veneno. It isn’t the most thrilling remote control vehicle around, but it looks great and drives just fast enough to entertain some kids on Christmas. Model collectors may want it just for the resemblance it bears to its real-life counterpart, which is complimented by its automatic doors, LED lights, and stick shift controller. 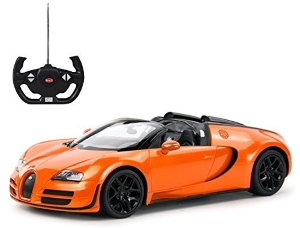 The Bugatti Veyron is fast, sporty, and packs an immense amount of long term value. For a hobbyist with any level of experience, it is a thrill to drive. Capable of being run at a distance of 30 feet from its controller, it allows for quite a bit running space.

Running on 5 AA batteries and one 9 volt battery, it drains battery power rather slowly, ensuring that maintenance costs stay down over time. 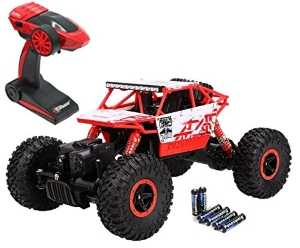 Constructed to traverse rocky terrains, the Top Race Rock Crawler can tear through mud, dirt, gravel, and more with no problems whatsoever. Possessing 4-wheel drive, it is as user-intuitive as any remote control car you’re going to find. Running on a total of 7 AA batteries, it is very easy and affordable to maintain over time. If you’re looking for the best remote control car around, this is a great choice.

The best RC cars allow people to embrace their inner child with their adult mastery of basic electronics. RC racing has all the thrill of full out street racing with none of the danger and a significantly lower cost of entry. Whether one is just buying a gift for their younger relatives or looking to join a local group of racing enthusiasts, cars like the Top Race Remote Control Rock Climber are the kind of “toys” that inspire lifelong passions for automobiles and engineering.