Printing has always been the realization of ideas being put to paper. In the past, these images have always been two dimensional designs that needed material to actually create a model of the vision. Now, 3D printing is an option.

Using a 3D printer to create a prototype or a product takes out the need to buy materials, making it extremely cost efficient for companies to see their ideas come to life.

What is a 3D printer?

A 3D printer is simply a machine that creates solid 3D objects from a digital image. The object is formed by printing each individual layer of material on top of the previously formed one. The layering process can be completed with any material that can be made into a fine powder, but some 3D printers utilize liquids to create the printed object.

See Also: The Complete Guide to All-In-One Printers for Your Office

What are the Different Types of 3D Printers?

There are many different types of 3D printers available on the market. Some are designed with manufacturing companies in mind. These options cost a bit more money, but they have added features and efficiency. The more economical 3D printers tend to lack a few features when compared to the commercial ones, but they are perfectly designed for use in the home. Consider the different types of 3D printers and the printing technology used in each before deciding which is best for the printing projects that need to be tackled.

3D printers that use a fused deposition modeling process to create objects that utilize plastic filaments in the process. These filaments are heated to the melting point, and then used to form the layers of the object being created. FDM printers are available in both desktop models and industrial sized machines.

The selective laser sintering method of 3D printing involves the use of lasers and a powdered material, often nylon, to create a solid object. The material is heated to a few degrees above its melting point before it is placed on the building platform. Then, it is melted with a laser beam, which bonds together each layer of the object being printed. Before the printing process begins with this style of printer, the oxygen is removed from the printing chamber and replaced with nitrogen to help prevent fires.

The stereolithography process is the first 3D printing process developed. This method of 3D printing uses a special liquid plastic to create objects. Once a layer of liquid is placed on the build platform, it is traced with an ultraviolet laser. Doing this starts a chemical reaction in the substance that hardens the liquid into a tough plastic material.

A 3D printer that uses binder jetting combines thick gypsum based powder with an adhesive binder to create a solid object. The powder is placed on the build platform, and then inkjet printer heads are used to jet the binder into the powder. A binder jetting 3D printer can also create objects in color. Printers of this type have also been designed to create candy, which uses powdered sugar and water instead of traditional powder and binder combinations.

The polymer jetting method is a combination of stereolithography and binder jetting. The printing process uses inkjet printer heads to create objects, but a liquid plastic is utilized instead of a plaster like powder. Each side of the inkjet printer head is fitted with an ultraviolet light that will harden the liquid after it is placed on the building platform. Different liquid plastics and colors can be combined with this method to create the firmness and the exact tone desired in the final product.

What are the Advantages of Owning a 3D Printer?

There are a number of advantages to owning a 3D printer. With traditional manufacturing methods, the ideas have to be molded and created using tools and equipment that cost a lot of money. The initial cost of a 3D printer may be financially noticed, but in the long run it will constitute a huge savings. Materials that may not easily combine from raw material can be combined in the liquid state of the 3D printing process to create new, more durable materials. Complex shapes and designs can be created with the print head, and products can be individually personalized without creating new, costly molds in the process. these printers are being used to create amazing items, such as artificial limbs, at a reasonable speed without producing a lot of wasted material.

Who are the Contenders for the Best 3D Printer?

Buying a 3D printer can be a bit of a challenge, especially if the different printing methods used are a foreign concept. These printers can be bought at any location that sells high end printers.

Looking at some of the top retailers, here are some of the top contenders in each price range to help make the products more familiar before a purchasing decision is made.

The FlashForge 3D Printer is one of the best options for those looking to purchase a 3D printer that will not break the bank. This 3D model is designed with a lightweight, wooden frame and a dual extruder that is designed to produce a high quality print. It also is equipped with a heated build platform to prevent certain filament types from shrinking and curling under as they cool.

The MakerGear M2 is hands down one of the best 3D printers in the mid-priced range that gives the most desirable features for the price tag it carries. This specific 3D printer features an open design that is built upon a sturdy steel frame. This third generation 3D printer boasts a large build platform and top of the line linear motion components that assure that only exceptional object are produced.

Overall, the LulzBot TAZ 4 3D Printer is considered to be one of the best printers that can create three dimensional objects. This model of3D printer brings to light the newest evolutions of 3D printing. It is fitted with plug and play technology that allows a wide range of ink heads and filaments to be equipped and used during the printing process.

Things to Consider when Deciding Upon the Best 3D Printer

The obvious feature to consider when purchasing a 3D printer is the quality of the final product, but there are other features that are important to consider as well. Color may be important to one company; however, another may only be concerned with the size of the build area. Some of the key features that will help determine which 3D printer is best suited for the printing jobs ahead are as follows:

The build area is the maximum size that an object being printed can be. A smaller build area can limit the printing capabilities or require the job to be cut in half and combined, which will take twice as long to achieve the desired outcome. Look for a build area that is at least 5” x 5” x 5”.

The horizontal resolution determines the amount of detail that can be acquired in each printed layer. For fine detail, look for at least 0.25 mm. The vertical resolution is the thickness of each layer. A thickness of 0.2 mm or less will create a smoother finish on the printed object.

Print speeds can vary based on the material being used and the complexity of the print job. In general, the top speed of a 3D printer should be at least 20 mm per second.

Each 3D printer is designed to use different filament sizes and types. The most common width used in 3D printers is 1.75 mm. Certain types of filament require additional features, such as a heated build platform to keep the object at the desired size while it is being printed.

The 3D Printer Reviews are in: Pros and Cons of Each

FlashForge 3D Printer, Dual Extruder: The Best for a Budget 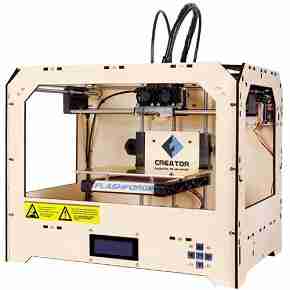 Times can be tight for small businesses, but having a 3D printer can save a lot of money in the long run. The FlashForge 3D printer is an option that has features that are desired like a dual extruder as well as a price tag that will not break the bank.

• Assembly of the device is simple, and it comes with spare parts that may be needed at some point.
• This device has an exceptional resolution and a great print speed compared to other 3D printers in the same price range.
• Little maintenance is required with this device, aside from the occasional air compressor dusting.

• The platform needs to be readjusted for every print job to assure the object being printed has no flaws.
• Print Jobs right out of the box with PLA are not optimum quality. It needs some adjustments and programming to utilize this filament type.
• The body is made of wood, instead of a sturdier material that would prevent warping.

The MakerGear M2 3D Printer: The Best for the Money 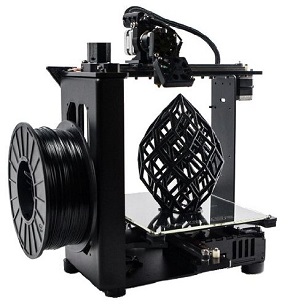 The MakerGear M2 is a device that gives you most of the same features as a high end printer at a fraction of the cost. The printer itself is built using high end materials that will endure years of use.

• The MakerGear M2 has a rather generous print area that produces quality prints at a reasonable pace.
• This device is built with all metal parts to assure that the printer can stand up to years of use.
• Extremely high quality prints with fine detail without many adjustments at the time of purchase can be achieved.

• The electronic cooling fan is mounted horizontally, which hinders the actual cooling process a bit.
• The printer makes a lot of sudden, fast moving motions while printing, so it needs to be stable on a work bench or a sturdy surface that will not shift with the device.
• The screws have a tendency to slip during print jobs that cause a lot of vibrations. 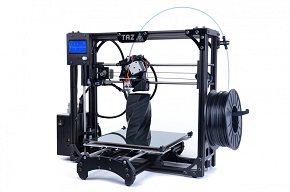 The LulzBot TAZ 4 is an innovative machine with robust features that are designed to produce quality prints with print job 100 having the same consistency as the first. This specific printer is one of the best 3D models currently available on the market.

• The printer comes pre-assembled, and the setup is a simple process to complete.
• The device has a top of the line plug and play system that gives you the option of several different printer heads and filaments.
• This printer is fully upgradable, making it easy to adapt to new printing demands.

• Leveling and calibrating the print bed is a bit tedious during the set up process.
• This device uses the more uncommon 3 mm filament size, which tends to cost a little more money.

Buying a 3D printer can be a great option for someone who manufactures a lot of objects. If the finances are available to purchase the best 3D printer that money can buy, making that decision will save a lot of money in the long run. Decide upon the features that are optimal for the printing jobs that will be required, and start considering the options available in the price range that is desired. Make sure to consider all of the features and continued expenses that will exist, such as buying new filament. The LulzBot TAZ 4 is definitely one of the premier options for top of the line printers, but the other options considered here are also great choices. Do some research and compare the features of any 3D printer with others in the same price range before finalizing a purchase.