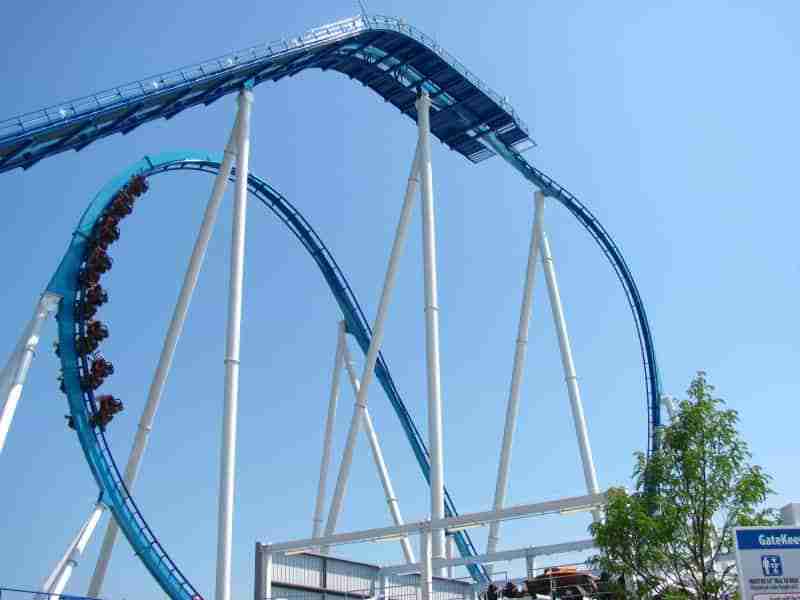 Located in the Lake Erie town of Sandusky, Ohio, Cedar Point is one of the top amusement parks in the world today. Measuring in at 364 acres, the park contains a record 71 rides, including 16 roller coasters. With 5 roller coasters over 200 feet tall, including Magnum XL-200, Millennium Force, Wicked Twister, Top Thrill Dragster, and the new Valravn, it is the absolute best place for roller coaster junkies to get their high.

Located in Orlando, Florida, Universal Studios Florida is run by NBCUniversal, featuring a number of movie and television themed rides. Currently, the park plays host to a giant set of Harry Potter themed rides. While the park possesses no roller coasters, it does possess some of the coolest 3D, live-action rides you’re going to find. For more details about Universal Studios Florida, click here.

One of many Six Flags theme parks in the United States, Six Flags Great Adventure is in Jackson, New Jersey. With 50 total rides, including 13 different roller coasters, and 2 water rides, it is the premier theme park of the northeast. Initially opened on July 1, 1974, the park plays host to around 3 million visitors each year. The park operates from late March to early January.

Perhaps the most legendary and iconic amusement park in the United States, Disney World’s Magic Kingdom is a terrific place for families and young children. Filled with actors dressed as Disney characters, it’s a near dream for Disney fans of any age. To keep things interesting for the adults, the park also hosts several roller coasters and other rides. Located in Orlando, Florida, it sees attendance of around 20 million every year.

Located in Santa Clarita, California, Six Flags Magic Mountain is one of many Six Flags amusement parks scattered across the country. It measures in at 262 acres and plays host to 19 roller coasters; a world record for one park. Bringing in around 3 million visitors annually, it is the 18th most patronized amusement park in North America. It contains 43 rides in total.

Sitting on the border of North and South Carolina, Carowinds is in both Charlotte and Fort Mill, respectively. A huge, 398-acre park, it possesses 64 total rides, 16 of which are roller coasters. The park’s tallest ride is WindSeeker, a 301 foot tall swinging ride that moves riders up and down as it spins. Currently, Carowinds sees attendance of around 2 million every year. However, it’s growing every year.

Though it faces quite a bit of competition from Sandusky, Ohio’s Cedar Point, Kings Island is still capable of bringing in quite a few people yearly; it typically attracts around 3 million visitors. Measuring in at 364 acres, it possesses a total of 47 rides; 15 of which are roller coasters. Known for its Eiffel Tower replica, it also possesses three different water rides.

Built on top of a former berry farm, Knott’s Berry Farm is located in Buena Park, California. It measures in at 160 acres, featuring a total of 39 rides; 10 of which are roller coasters. It typically brings in pretty impressive attendance, ranking 12th in 2015 with 3,867,000. A few of its iconic rides include the Calico Mine Ride, and the Timber Mountain Log Ride.

Located in the home of Hershey’s Chocolate, Hershey, Pennsylvania, Hersheypark is the attraction town’s resident amusement park. A historic amusement park, it first opened in 1906. Measuring in at 121 acres, it features 76 total rides, 13 of which are roller coasters, and 14 of which are water rides. Typical attendance for the park floats around 3 million visitors yearly.

The largest free-admission amusement park in the United States, Knoebels is located in Elysburg, Pennsylvania. With a total of 63 rides, 6 of which are roller coasters, it offers a very respectable amount of attractions. The park also plays host to carousels, trains, and a variety of other rides. You should, however, note that while parking and admission to the park is free, it does cost money to ride rides.