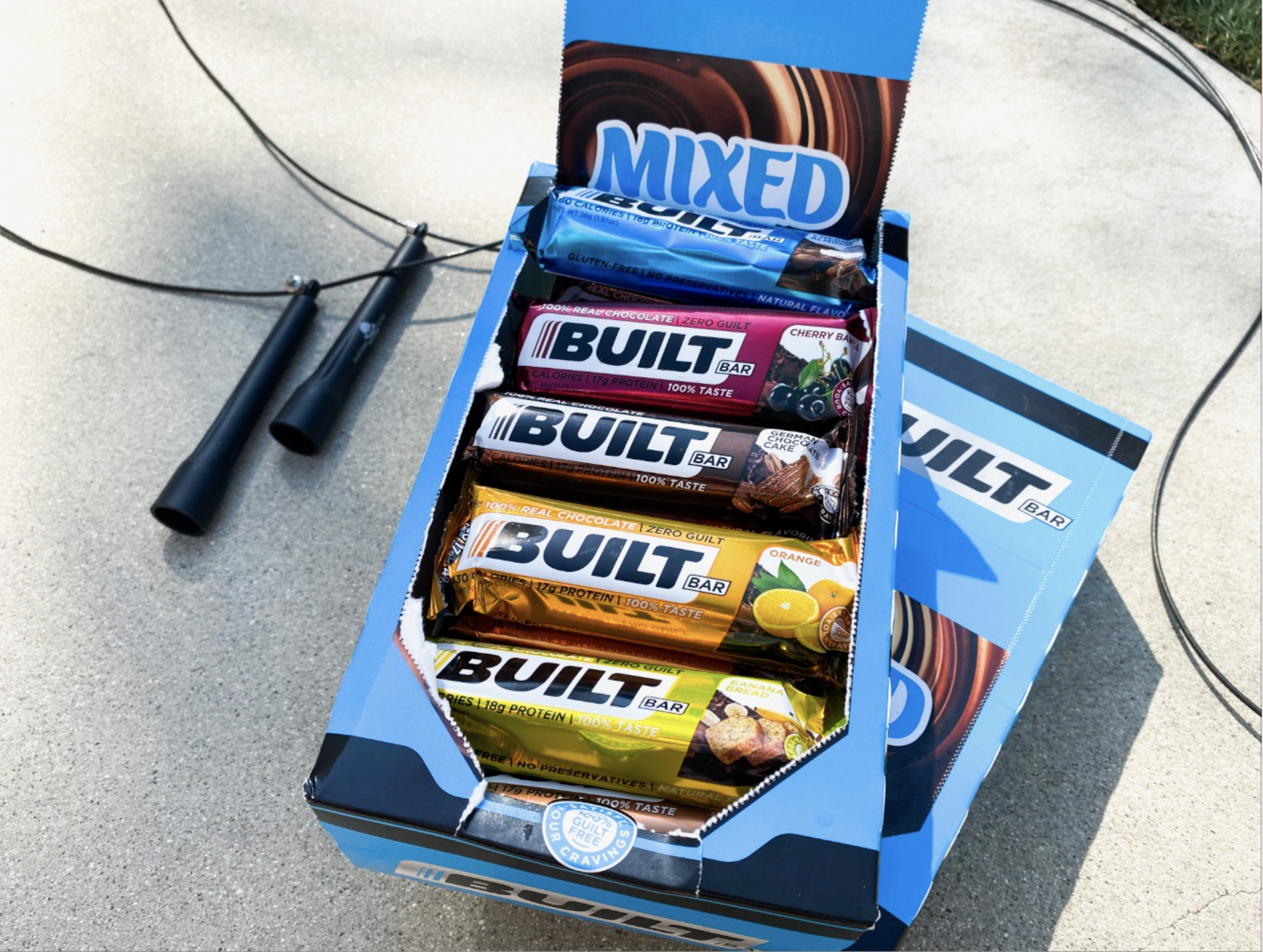 After going on hiatus, Built Bar recently came back with 18 new flavors that are a step up from the original ones. We tasted every single flavor plus the maple pecan, which is a limited release, and immediately noticed the difference between the old and revamped versions. We were fans of the original Built Bar, as it was full of chocolatey goodness while staying low-cal, low-carb, and high protein, but the improved protein bars hit all the right taste buds without dulling our palate. In this review, we’ll go over our methodology for taste-testing each Built Bar, share our favorite flavors, and let you know if it’s a healthy choice for you.

Built Bar is based in Spanish Fork, Utah, whose founder is a molecular chemist with a long history of experimenting with cocoa beans and creating new flavors. His experiments eventually led to nutritious protein bars that we now know as Built Bars. While not very many protein bar brands offer a variety of flavors, Built Bar not only specializes in creating different flavors to cater to each person’s taste buds but also listens to customer feedback. After going off the radar for a little over a month this year, they came back with a new look to their packaging and a noticeable improvement in their unique flavors.

We went through each of the 18 new flavors and noted the ingredients, taste, and texture before stacking Built Bar up against other protein bar brands. Our review won’t go into detail about each Built Bar, but we’ll highlight comparisons among them, such as which ones were higher in calories or tasted sweeter. Here’s a rundown of our Built Bar impressions:

What are the ingredients?

Each Built Bar is packed with protein with as little calories and carbs as possible. The calories did increase from 110 to 130 as the lowest calorie count, but that’s more on the protein side as most bars have 4g net carbs. The highest calorie count is 180 and in between is 160 calories.  Ingredients vary by flavor, but most Built Bars are generally made up of whey protein, gelatin, erythritol, glycerin, chocolate, and maltodextrin. We liked that the nutrition facts are spelled out in detail on the website instead of having to order them and find out the ingredients once we received them in the mail. Overall, Built Bars are gluten-free, naturally flavored, have zero preservatives, and made of 100% real chocolate. In other words, they’re keto-approved!

How does it taste?

A lot of protein bars we come across tend to have a chalky aftertaste, but with Built Bar, we only tasted sweet bliss in the form of a healthy snack. Our team has split taste preferences, so one person enjoyed the chocolate flavors more than the fruity ones while someone else only liked the nutty flavors. The double chocolate flavor was definitely the sweetest out of all the bars. The fruit flavored ones like orange and raspberry have less of an artificial taste this time around, with the latter offering a mix of tarty and sweet. All in all, some flavors have subtle hints of taste improvements while others have noticeably changed (for the better).

The original Built Bars had a chewier texture that reminded us of taffy, and while it didn’t make our jaws sore from chewing, some of the fillings got stuck to our teeth. When we took bites out of the new flavors, we noticed that they were fluffier and thicker, which meant more deliciousness in one protein bar. We still had to run our tongues over our teeth, but we had an easier time biting and chewing than before. The peanut butter flavored bars were the chewiest out of all them, and for good reason. The maple pecan and carrot cake with walnuts broke up the soft texture by adding nuts, so for anyone who likes crunching, these bars are for you.

While it’s easy to believe Built Bars are too good to be called healthy, they’re low in calories and carbs with just the right amount of sugar to keep your sweet tooth in check. The company doesn’t outwardly claim that their protein bars promote weight loss or muscle gain. Instead, Built Bars are simply sweet snacks to help build protein without tasting like a protein bar with a chalky aftertaste or a high-calorie chocolate bar.

How does it stack up to other brands?

Other brands like CLIF Bar and Quest are higher in calories than Built Bar, with the former averaging 240 calories per bar and the latter with an average of 190 calories per bar. The highest calorie count for Built Bar is 180, so that’s a clear sign that they’re a protein bar brand that’s actually low in calories. On the other hand, Built Bar doesn’t offer the lowest sugar amount, as most bars have 4g while Quest only has 2g. That said, the ingredients differ by flavor, but for the most part, Built Bar doesn’t win in the low-sugar department. 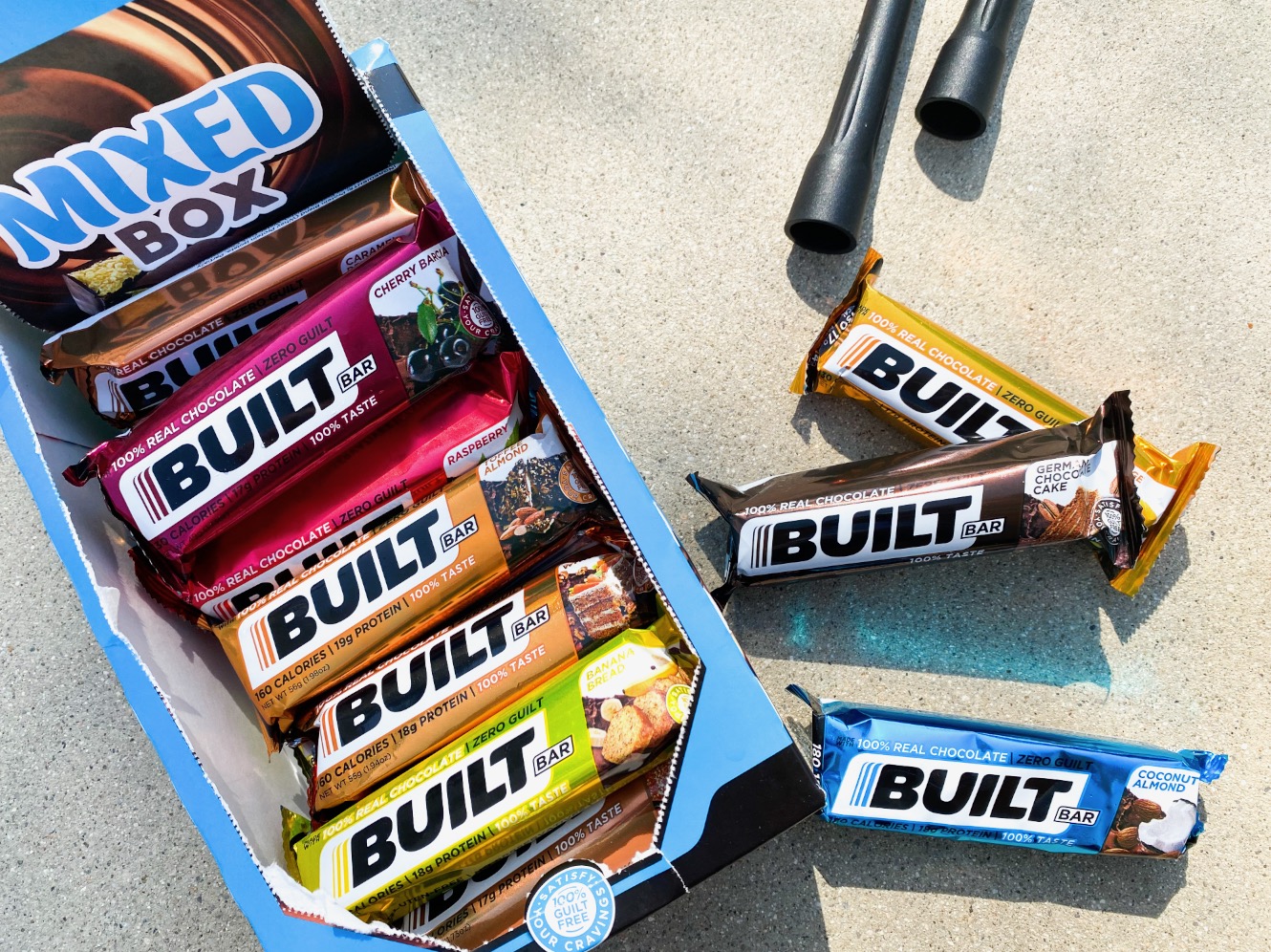 Our team was divided in terms of which bars tasted better, so we compared our rankings and picked out the flavors that appeared most often among us. The winners were:

Where to Buy Them

As of right now, you can only buy Built Bars online either on their website or from other supplement retailers. We recommend either building your box with three flavors of choice or trying out a mixed box which includes all 18 flavors. We’re not sure if Built Bar will ever appear in storefronts, but given the positive feedback for the revamped bars, we predict that the company might make a move to put their products on physical shelves.

Is Built Bar for You?

If you find yourself craving sugary treats, Built Bar is the perfect balance between healthy and sweet. If you love chocolate, then you’ll definitely want to grab a few bars to stash in your cabinets, drawers, or even your bag. If you have a ketogenic diet or diabetes, Built Bars are safe to eat since it has low sugar and uses erythritol. Overall, if you work out or need a quick and healthy (but satisfyingly sweet) snack, Built Bar is your go-to.

Built Bar knows what they’re doing by briefly halting production on their protein bars and coming back after some brainstorming for a better and tastier experience. We liked the originals well enough, but these new flavors stretched out the company’s potential for a healthy and nutritious snack without copying other brands or falling short on taste and texture. We were casual fans before, but now we’re huge fans and plan to stow away several boxes for our snack breaks.

Even better, you can score some exclusive discounts on your first box of Built Bar!

Use code 6BARSAMP to get a 6-bar sample box for $6! New customer only.

Use code BSBSAMP to get Built Boost 12-pack sample with free shipping! New customers only.

Use code 9PSAMP to get BuiltGO 9-pack sample for $9.95! New customers only.

Use code SAVE12 for 12% off your entire order. All customers.

How long do Built Bars last?

Protein bars have various expiration dates, but Built Bars typically last for several months before you have to toss them out. Make sure to check the expiration date for each box or bar before eating.

Do Built Bars have to be refrigerated?

Built Bars don’t need to go in the refrigerator for it to last or taste good. If you like your protein bars chilled, go ahead and stick them in the fridge for those long and hot summer days.

When should you eat a Built Bar?

Generally, you should eat a protein bar after a workout, but before is also recommended. That said, Built Bars are a great alternative for your sweet cravings, so you can enjoy them as a snack or dessert.

Built Bars don’t have any artificial preservatives and are low in carbs, so it’s keto-approved. They don’t have a chalky aftertaste and are rich in flavor, with ingredients that are natural and gluten-free.